Book Review: The Quran: Epic and Apocalypse by Todd Lawson 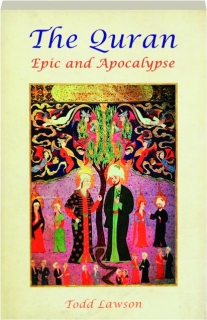 What is an epic and what is an apocalypse? After reading this book, it seems that Todd Lawson, an Emeritus Professor of Islamic Thought at Toronto university in Canada, is arguing that an epic provides a narrative about human origins, about self-identity, social structure and our relationship to the supernatural. In that sense, the Qur’an does indeed appear to qualify as an epic. And the apocalypse? Apocalypse is the Greek work for Revelation, Lawson informs us, and reveals secrets about the heavenly world and Divine judgement. So, the Qur’an would qualify on that count too. Great, now – what?

Well, according to Lawson, the situation the world finds itself in means that everyone should better acquaint themselves with the Quran.

“No book has had a greater impact on the history of humanity and the development of world culture. I think it is not an exaggeration to say that to make it part of the educated global citizen’s reading – what used to be thought of as “soul formation” – is a desideratum of some urgency.” (p xii)

I try and keep an open mind with all books. After all, an author – especially a university professor – has often spent years carefully thinking about various issues and their arguments deserve to be heard respectfully before we come to a decision on whether they sound reasonable or not. Here, Lawson, made an argument that I found intriguing:

“If read in the tanzil order of revelation, the Quran sounds like an apocalypse; if read in the order of the mushaf, the Quran sounds like an epic…As sacred epic, then, the Quran is concerned not with a particular ethnic group (unlike previous epics), rather it is concerned with forging a new group for which it is providing a universal narrative. The new group is humanity. This is not a mere literary achievement; it is an epoch-making shift in religious consciousness.” (p xvi-xvii)

Does viewing the Qur’an as epic and apocalypse aid our understanding of its message and power. Lawson claims that it does:

“To recognise the Quran’s apocalyptic and epic voices and their contrapuntal relationship is to observe something quite essential about the way in which the Quran commands and grips an audience, the way it teaches, and the way in which its readership, its audience, develops its attachment to the book.” (p24)

There may perhaps be something in this. I recall reading somewhere – I can’t remember where – of a religious bookseller in a Muslim country who said his best-selling books all concerned topics about the Last Day and the Divine Judgement. But that is hardly conclusive.

I think Lawson is on surer ground when he contrasts the Qur’an with some other epics (think of the Old Testament or the Hindu scriptures):

“…the epic voice of the Quran also offers a critique of other competing, more narrowly ethnic or national epics. The Quran thus calls forth a universal human identity through its insistence on the originary Day of Alast, on the certitude that all human communities have received divine guidance from the same unique and only God, and that all humanity is participating, consciously or not, in a process of civilisation, an epic journey from ignorance to knowledge or enlightenment.” (p 169)

I have read much of the Old Testament and have always found the narrow focus on Israelite history to be somewhat off-putting. The Qur’an by contrast in its very first surah says that it is a message from the “Lord of the worlds” and its final surah calls on us to “seek refuge in the Lord of humankind”. It is an avowedly universal message.

Lawson’s book also includes a Chapter on “Joycean Modernism in Quran and Tafsir” which in practice contains an extensive discussion about the views of the “Iranian Prophet” Sayyid Ali Muhammad Shirazi (or the Bab) – one of the central figures of the Baha’i faith. The chapter seemed out of place in a book about the Qur’an until I learned that Professor Lawson was himself a Baha’i. The chapter seemed a bit forced and would have been better published separately rather than in a book about the Qur’an.

This entry was posted in Books, Islam and tagged epic and apocalypse, todd lawson. Bookmark the permalink.