The immensely influential Islamic scholar, Shaykh Yusuf al-Qaradawi, today delivered his first khutbah (Friday sermon) in decades in his homeland Egypt as he returned to the country and led a gathering of over 200,000 worshippers in Tahrir Square.

Qaradawi became a controversial figure in the West after a campaign by Zionist organisations who were furious because of his support for Palestinian resistance fighters.

The British government caved in to the pressure and banned Qaradawi from visiting the UK in February 2008 despite representations from many Muslim organisations – including a piece I wrote for Cif at the time – making clear that Qaradawi was a vocal and effective critic of al-Qa’ida and extremism. There must be many senior figures in the UK government, not least senior counter-terror officials, who will today be watching the huge crowds that have come out to pray behind Qaradawi and will be shaking their heads at the short-sightedness of UK policy.

Here is an extract from Qaradawi’s khutbah today as reported on the Christian Science Monitor website and below that is a picture of the huge number of worshippers with Qaradawi in Tahrir Square:

“Don’t let anyone steal this revolution from you – those hypocrites who will put on a new face that suits them,” he said, speaking to at least 200,000 who gathered for Friday prayers in Tahrir Square, the epicenter of Egypt’s uprising. “The revolution isn’t over. It has just started to build Egypt … guard your revolution.” 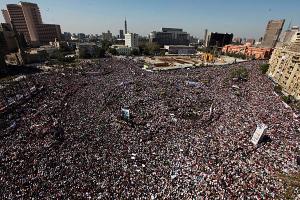 Update: A Reuters report in Gulf News says the Cairo crowd was two million strong and provides some detail about what happened when Qaradawi ended the Friday prayer:

As Qaradawi left the stage, hundreds of people rushed towards him, some falling over, as they tried to touch him or talk to him. Military police and volunteers formed a protective cordon around him as he was escorted away to his car.

Egypt’s official state news agency, which before Mubarak’s downfall, had largely ignored or played down protests, said on Friday that more than 2 million people were in Tahrir Square, which became the nerve-centre for anti-Mubarak protest.

Such a popular outpouring of emotion was on a par with the 1970 death of President Gamal Abdel Nasser, whose speeches gripped and galvanised the Arab world, when mourners flooded the streets of Cairo and Egyptian cities.

This entry was posted in Islam and tagged cairo, free speech, khutbah, qaradawi. Bookmark the permalink.