The ‘Times Square Bomber’ and the innocent dead 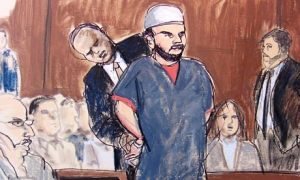 The news in today’s papers that the Pakistani born US citizen Faisal Shahzad has pleaded guilty to all ten charges against him relating to the attempted car bombing of Times Square should in a more sensible world urgently prompt a rethink in the US administration about its callous strategy in Afghanistan.

Faisal Shahzad told the judge yesterday that ‘I want to plead guilty 100 times because unless the US pulls out of Afghanistan and Iraq, until they stop drone strikes in Somalia, Pakistan, and Yemen, and stop attacking Muslim lands, we will attack the US and be out to get them…Listen, you are attacking children with your drones in Afghanistan. I would not consider what I did was a crime. I’m aware it’s a violation of the United States laws, but I don’t care for the laws of the United States.’

Craig Murray, the former UK ambassador to Uzbekistan, noted yesterday in an article about the death of the 300th UK soldier in Afghanistan that for every Afghan fighter that the US/UK governments are killing, they are also killing at least six civilians. Those are dire figures and it is a mark of just how supine much of the coverage in Western newspapers generally is that this fact is not more widely known and does not prompt outrage.

Faisal Shahzad’s attempted car bombing was without question an evil act and if it had been successful it would have devastated the lives of many families . Yet, the fruits of existing Western policy in Afghanistan are also evil and they are with every passing day devastating the lives of many more Afghan families.

This entry was posted in Government and tagged afghanistan, al-qa'ida, taliban, terrorism. Bookmark the permalink.

7 Responses to The ‘Times Square Bomber’ and the innocent dead